The title in no way denigrates the black belt or diminishes the learning journey one does up to black belt. The title is to a reflection of my own capabilities as a young black belt way back when, and it was in hope to provoke thought about what the black belt is, and where you are going to take it to.

Exposing yourself to as much training as I had, or 'the school of hard knocks' as some of the black belts would call it, gets you inured to the pain that's part of the intimidation students feel when they start sparring. Putting on my uniform, I felt like I was donning body armour ala Batman. Yeah, as you can see, I was feeling pretty good about myself, lucky to be in a semi-contact environment, and getting quietly cocky about the skills I was acquiring.

I was at the stage where sparring against opponents was less about stringing together strikes and blocks than about mental strategy. Part psychologist, part accountant, I was playing a mental game against my opponents. It was a kind of interactive 'Art of War' where time seemed to slow down and when you easily slipped into 'the zone' because you were able to slough away all extraneous thoughts.

What I loved were explosive attacks that were able to beat an opponent's coverage or defenses. I'd also love feinting and landing unbelievable strikes - those coming from impossible unexpected angles. Of course, I took great pride in my improving coverage - just because I started out with little skills in that department.

What gave me a real buzz however, were that the rules of engagement allowed many things other schools at that time wouldn't promote. Controlled strikes to the knee and groin for instance were staples in our arsenal. Hair grabs, throws, and take downs were commonplace. The only rule? You can hurt, but you can't injure. Opponents were expected to walk out of our dojo on their own two feet - adjusting their groin protectors on the way out.

... and while such rules allowed our black belts to gain an impressive array of skills beyond the usual kick-punch combinations other schools might gravitate towards, it also meant that visiting opponents from other systems had to play catch up with our more bawdy tactics.

What I couldn't understand, and what nagged at me time and time again was something my instructor, a man that I highly respected, commented on what we were doing. He said, "sparring only makes you good at sparring." Additionally, in formal classes we'd spend an inordinate amount of time practicing kata. What would then really confound me was the fact that other black belts who got it, who knew what he was saying and were spending time working out at kata, were good all round martial artists - technically proficient with their kata and great at fighting. I just couldn't understand that.

But of course my instructor in the US was right, and my obsession with my growing skills, of what I thought was one of the most important things I had to develop at that point in time, was only a small part of the large bag of skills every martial artist should be working on all the time. Many years later, I decided that growing such meagre abilities in that arena was somewhat of a distraction, and I benefited from returning 'back-to-basics' when I moved here to Perth (another unfortunate concept my instructor kept nagging about which I then blatantly ignored), and think about things such as strategy, the place basic techniques had in my arsenal of weapons, power generation methods, and also what I was practicing.

This was the beginning of my true journey in Perth, and it started with truth bombs gifted to me when I was a young black belt ... and it took me all this while to take action on them.

To set yourself up for Online Collaborative Learning see Resources
--

What happened that sparked you into the different way of thinking? What did you find out? Where did your path change bring you to? I'm dying to know.
7 August 2011 at 08:37

I'm not sure that there was any one thing. A lot of it was trying to process the 'wisdom' and 'insight' shared with me by my instructors, the experience I was accumulating for myself, the structure of what was being presented, and trying to make sense of it all despite the misconceptions/myths/assumptions that have been inherently coming along for the ride all these years.

Perhaps the most dramatic catalyst for my change comes from the research I've done into my lineage and the discussions I've had with other very clever instructors who are on a similar path.

What I would like to say however is that many 'hardcore' practitioners out there are not giving traditional knowledge enough of a chance. Lots of it has to do with how modern people value the martial arts - through the lens of Muay Thai or through MMA competitions. I'm not saying there's no skill, but a lot of emphasis is on the grunt.

There is much traditional arts have to offer, and it's a shame to have someone needing to keep training at it for more than 20 years (or actually close to 30 years) before they figure it out!

SooShimKwan said…
While I was a colour belt there was this one black belt (II Dan), a Mr Franklin, that we all acknowledged as the pattern guy. Patterns were his forte. On occasion, however, he would participate in a sparring tournament and we would be amazed at him being such a profound fighter, when all we always saw him do was practice patterns. To me as a young colour belt this was the most puzzling thing!
15 August 2011 at 17:40

Colin Wee said…
Exactly my thoughts! I was this young, fit, and very very fast black belt. Yet try as I may, I just couldn't hit some of these senior citizens in the dojo. I mean ... what was my problem??? 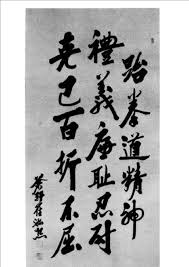