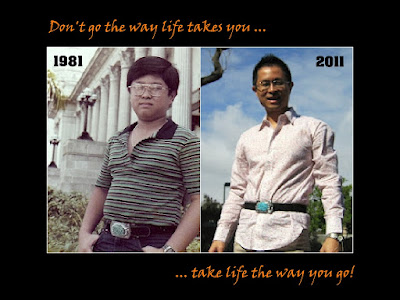 I am a middle-aged man, attempting to circumvent injuries, hang on to my fitness and quickly diminishing youth, and trying to live my best life. Through the week I pantomine combative movements. And every now and then I spend time with others who also dabble in mock combat.
I claim to be on the warrior's path, a wholly self-proclaimed distinction.
When I started this journey, I was an unsure, unconfident, and a naive boy. (Yes, that's my younger self, before I started training aged 11yo in the picture above). I saw martial arts on the big screen, and was mesmerised. It was the outlet from the drudgery of life as-I-knew-it. When I started, it was all about seeing what was demonstrated, and to mimic those martial arts moves as best as I can.
The early challenge was mostly conditioning and coordination, and required me to will myself to hold my own in class.
Eventually, the struggle between two combatants became more pronounced. Simply put, we are both attempting to out-guess, out-move, and out-gun the other.
Two things happened. Firstly, in-class training became an opportunity to look for tactical advantage, whilst non class time was spent analysing past exchanges for deficiencies or future opportunities. Secondly, the time in-class became an analogy for other non martial arts encounters in life.
The physical challenge of training didn't become any easier. But the capacity to endure, to push through, and to keep the composure had by then levelled up. And whatever fear or uncertainty that accompanied youthful enthusiasm had been desensitized by combat, replaced by the ability to 'get into the zone,' and perform close to, if not at my best when the going gets tough.
Having tasted the benefits from intense martial arts training and applying it in other aspects of life, the choice to stick to the road less travelled, rather than maybe binge drinking on a Friday night, sleeping in on a Saturday, or enjoying other more social pursuits, became less onerous.
As I put myself through my paces, another metamorphosis occured. I started seeing myself as a lens for the legacy system we have been gifted. The more experience acquired, the more I distilled from this system I've inherited. At its heart, it centers on the needs of the tactition, and then of course the threat from an unscripted dynamic opponent.
The struggle with the opponent doesn't diminish, however, the grammar of my responses now more-than-ever mirrors the phrasing from our pattern set. Does this mean I don't make any mistakes? No. Does this mean I have nothing else to learn? Not at all. Does this mean that I can't be beat? No way.
The truth is whilst I believe the martial arts has so much to offer to an individual, The Way of the Warrior is not for everyone. It's subjective of course, but I have been spiritually energised from one-on-one combat. The training makes you dig to draw strength, seek catharsis, wish for spiritual development, and sometimes pursue esoteric yet questionable knowledge.
There's no real end goal in the Warrior's Path. I mean you can say vaguely you want to become 'better.' But the Warrior's way is not just having a list of technical skills to acquire. It's simply getting over yourself, focusing on the process, opening up the mind to understanding what works and doesn't work for now, not ever giving up, and using your growing insight to make wiser decisions.
There are fewer and fewer inviduals at my level who are still pounding the pavement like this. I count myself lucky to be able to cross train with several through the year. However, even if they are not available, I can carry on the encounters through mental visualisation training. I revisit past training, unpack old fights, and run through permutations within our combative system.
Having survived all my mock and imagined battles, I am now have a rich tapestry of experience in unpacking my inner struggles and external entaglements. There are shockingly few ... or no civilian institutions which offer the same training I have received. It's a shame because good martial art training has so much to offer those who are struggling with life in the 21st Century.
Look Ma, I'm still at it.
Links
--
[ Traditional Taekwondo Perth | Testimonials | YouTube | Subscribe | Sitemap ]
Find us on FaceBook and MeWe

We are located in Perth, Western Australia. But if you can't make it to us ...
Travel itinerary for our black belts in 2020/1 include but not limited to:
USA, Singapore, and Japan. Please inquire.