I've got one more class to give this week, and have cancelled all my other taekwondo classes for the next month while I'm off to Italy for a holiday! Woo hoo!

I thought to post on a friend of mine Stuart Anslow 4th Dan who I think is doing one heck of a fantastic job making waves in the Taekwondo world. Chief Instructor of Rayners Lane Taekwondo Academy, Stuart and I met online in 2003 during the formative stages of IAOMAS, a free martial art student support organisation he founded. 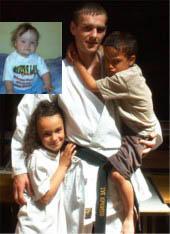 It wasn't easy to blow Stuart off as a just another Taekwondo instructor. In all our early exchanges and since then, Stuart shows great passion for martial arts, Taekwondo in particular. More so than that, he is intelligent, well read, articulate and generally knows his martial arts stuff very well.

While I have had a high regard for him from our online exchanges and from my visit to the quality school he runs at Rayners Lane, the most profound development attributed to him is the book he wrote titled Stuart Anslow's Chang Hon Taekwondo Hae Sul. This is perhaps the most important book that has come out for Taekwondo ever - given the overall lack of resources in the Taekwondo world.

Contents of the book show a man who is driven to bring value to Taekwondo. This guy has really done his research folks! I was extremely impressed with the breadth of material he covered, and I have never failed to compliment him on this work.

I have called Stuart Anslow a "martial arts personality," and Taekwondo's "poster boy," but the truth is he is a credit to the Taekwondo world at large.

I cannot more highly recommend another all rounded instructor.

Let's see if we can get him on here to answer a short interview ...

If you visit my blog, would you care to answer a few questions?

1. What keeps your interest going in the martial arts?
2. What do you think of sport Taekwondo?
3. Where do you see Taekwondo going in the next 50 years?
4. What are your goals in the next year?
5. What advice would you give a newly promoted Taekwondo black belt?
6. Lastly, with this blog in mind, what is your favourite taekwondo technique ... and what advice do you have for students learning it?

Hope you can answer these questions for us.

Colin Wee said…
I just received an email from Stuart. Here it is.

First of all thanks for the recognition.. maybe not TKD's posterboy LOL, but I try to put something bcak into the art when I can.

Onto the questions:
1. My interest in the martials is one Ive had since childhood, so I guess its just an ongoing process. The guys in IAOMAS and others keep me interested and motivated, as does upsetting the status-quo in TKD I guess! LOL

2. Sport Taekwondo has its place, but I dont like it when its the 'only' place in a martial arts club. I have competed a fair bit over the years, but as a test of myself rather than gaining trophies and this is what I emphasis to my students. I also empahsis that competition is the game and it should never be confused with reality fighting!

3. The next 50 years is a long time! However I think TKD schools teaching a more fuller curriculum rather than just sparring and solo patterns will have gained more prominence. If the WTF lose Olympic recognition it will change the face of them on a grand scale. The ITFs will continue to bicker and the rest of us will get along and train with as many likeminded people as we can.. or of course the McDojangs will drive us all out.. either way, I hope real Taekwon-do is still there!

4. The main goal is to get Volume 2 of the books completed. Since Vol 1 was released life took over as we had a new baby and I just cant seem to get those 24 hour sessions down anymore.. my circumstances at own school have also changed so as taking the photo's there isnt an option anymore (cost/timewise).. but I aim to get there and hopefully with a year!

5. Look around and compare yourself with other blackbelts in your system. A true black belt wants to learn and increase their skills not become king of their tiny castle! Black belt is not the end, its just the end of the beginning!

6. I dont really have a favorite.. if it works it works, but seeing as you probibly want a specialized answer I like low block, due to its versatility of applications, from throws to choke. My advice in learning it would be to properly learn the solo technqiue first, then apply applications, the correct amount of muscle tension and follow through is achieved to make the applications work first time, every time.

Once again, thanks for the invitation Colin.