Taekwondo kicks for real ... I had a good training session last Thursday, I focused on intermediate taekwondo upper body strikes and kicks, and combinations of the two. Of note, there was an interesting discussion on taekwondo kicks and kick combinations that I would use only in sparring as opposed to in a real situation. Certainly a double kick where the first feints for the knee and the second kicks the head - whilst both legs are in the air, would represent a tactic which I'd only use in sparring. Why on earth would we train for something that we wouldn't use? It's not that I wouldn't use any one of the two taekwondo kicking techniques ... it's just that I wouldn't use them in that particular combination. I remember one sparring session when I stopped an oncoming 200 lbs 6' brown belt with that particular instep kick to the knee. I felt real bad, but hey ... that just goes to show you don't have to pull out the entire sequence. That first move was good enough to stop the guy in his tracks. Taking sparring-as-exercise, those fancy combinations are great to gauge what technique works, the distance, the timing, and the angle of entry. Kicks are versatile; expert kickers can kick you without you seeing the kick until it's just about to land. But you can't get that good until you're looking at all these combinations and permutations.


Taekwondo Kicking Related Posts
High Kicks in Taekwondo
Training Aids that Wreck Technique
Won-hyo: Where are your eyes on the back of your arse?
--
Colin Wee
Traditional Taekwondo Techniques, Patterns, and Applications at the Traditional Taekwondo Blog. [Subscribe using email or RSS feeds] [Tkd Sitemap]. Colin is a martial art instructor with 25 years of experience across three continents. Colin leads a small Traditional Taekwondo group for adults in Perth, Western Australia.

Mir said…
Wow! The fighter that was K.O. looked like he was still mentally preparing for the encounter, the kick caught him as he was still "getting ready" for the fight. At least that's what it appeared to be like. The other fighter was in attack mode as soon as the referee announced the start of the fight. I would suspect that the mental position of an attacker on the street would be more aggressive, and focused on damage than the mental attitude of someone seeking to win a trophy at a tournament. I would seek to kick out a street attacker's legs rather than kick for the head.
22 November 2009 at 22:56

Anonymous said…
Well, when you make that combo (dollyo-momtong and then olgul) the first one is useually a distraction, maeby in some trainings u would train hitting the target with both kicks and if your quick enough it could ko the guy you are fighting.... Ofc this combo is made for tkd sparring not street fighting. But this is a very good workout to train your hips moving into the kicks, so you get more power, if you are going to be kicking a lot in any fight this would be a very smart thing to practice.
6 February 2014 at 00:31 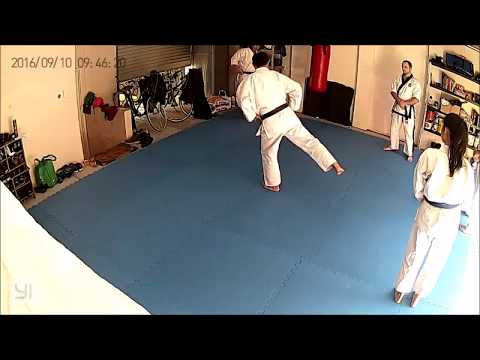 Taekwondo Side Kick of Won-hyo